My Underwater Volcano Theory of Growth 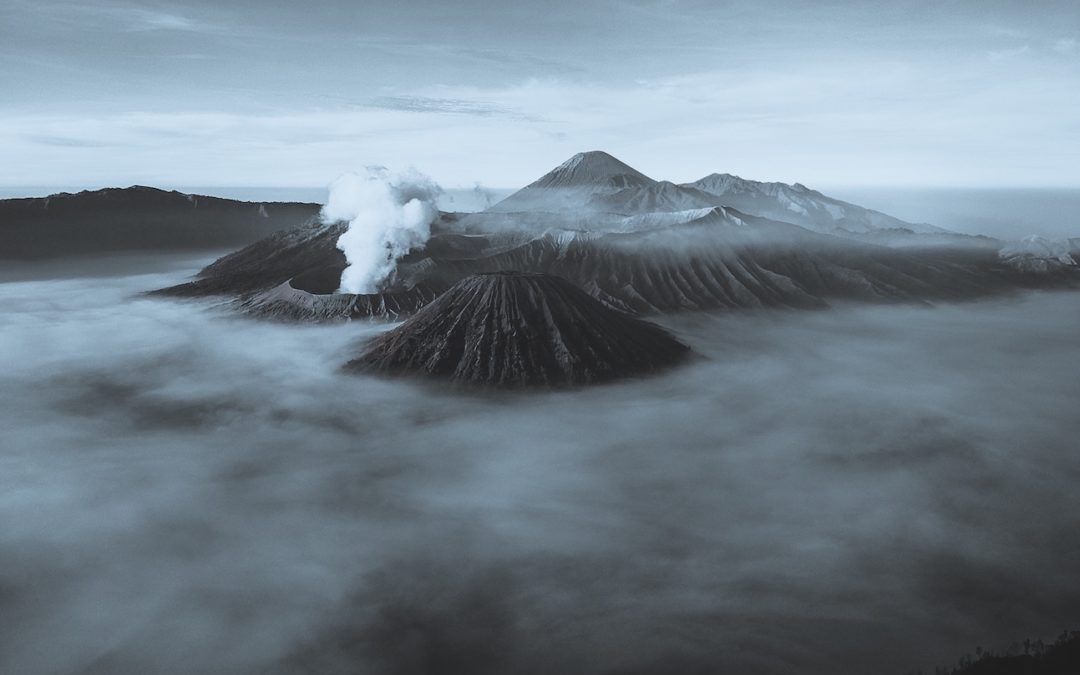 When I was a kid, I loved to read National Geographic. I still remember an article that appeared in the 1960s about the new science of plate tectonics. I felt a delightful shiver of terror at the idea that we are all floating around on giant rock plates that careen into each other like planetary bumper cars, plunging into the depths of ocean trenches and thrusting upwards to form massive mountain ranges like the Himalayas.

Among these geographic revelations, the concept of volcanic hotspots particularly fascinated me. I learned that the Hawaiian Islands were formed as the Pacific Oceanic plate passed northwesterly over a single volcanic hotspot. Lava from this hot spot spewed up through the ocean floor, creating island after island over hundreds of thousands of years.

In other words, the Hawaiian Islands are actually the peaks of towering underwater mountains. If you measure Mauna Kea volcano from the ocean floor, it dwarfs Mt Everest by nearly a mile.

These heady thoughts of height and depth bring me to my so-called Underwater Volcano Theory of Growth. Living in Hawaii for five years, I had a front-row seat for the ongoing eruption of Kilauea on the Big Island, and my theory invisibly but inevitably began to form in the depths of my mind.

I saw that the change process is like an underwater volcano. For a long time—years, even—nothing appears to be happening. Then you begin to see a disturbance on the surface. The sea boils and churns. Chunks of stuff fly through the air. And then, one day, an island appears.

As a sensitive person, I closely relate to this metaphor. Those of us who are built sensitive need to process emotions, realizations, situations, and decisions very deeply. As a result, we can take a very long time before we act. What’s more, we may not even realize we are processing, because it is happening so deep down in our minds. whether conscious or unconscious, though, our change process goes through three volcano-like stages:

Stage 1—Nothing appears to be happening

We might have no conscious awareness of the coming change. Or we might wish for change in some area of our lives, but feel stuck or stagnant. Either way, though, deep processing is going on. An island is forming under the surface.

Stage 2—A period of confusion, upheaval, or apparent chaos

In this second stage, startling or seemingly inexplicable events occur. These initial signs can be subtle. On the other hand, all hell may break loose. Either way, the previously still waters of your “normal” life are being agitated from below by the pyroclastic flow of change.

In this “Aha!” moment, all the bewildering events of the second stage organize themselves into a comprehensible pattern. This may happen in an instant.

Why look at change this way?

1—Change can be happening, even when I can’t see it.

2—When change is happening, I can sense it, even when it is subtle, vague, or unformed.

3— Sensing the change helps me not fight it. In fact, I can facilitate the change—by sensing what it needs.

Without this perspective, I fall back on my cultural conditioning, which dismisses uncertainty as a sign of weakness and puts a top priority on knowledge, clarity, and decisive action. The story of my new business name is a perfect example:  I had no idea that this mountain of an idea was building under the surface of my mind until it sprang up one day in July.

While this revelation of changing my business name and creating a new website came without apparent warning, I can now see that the signs of Stage Two unrest had been evident for months. Unfinished projects had been piling up in my business projects binder, making me increasingly uneasy.

In volcanic terms, the waters were roiling. But unfortunately, I didn’t see it that way. I lost my head and forgot my own theory entirely. I even told myself I must be hapless, disorganized, or lacking in ambition.

Had I remembered my volcano theory, I’d have asked different questions. Instead of asking, “What is wrong with me that I am not getting all these projects done?” I might have said, “Is there something that wants to happen here?” Then as I described above, I could have sensed that ‘something’.

A different view of change

In this example, the big change went ahead and happened in spite of me not seeing it coming: Luminos Listening will officially change to Sustainably Sensitive on December 18, 2018, including a completely re-designed new website, and The Listening Post will be renamed the Sustainably Sensitive e-zine. On my scale of life events, that’s a Mauna Kea-sized volcano.

And, if I hadn’t lost my head last spring and forgotten to adopt the Underwater Volcano point of view, I’d have perceived sooner a number of intriguing signs of underwater change.

As volcanoes approach the surface of the sea, they hurl boulders into the air. Likewise, imminent change tosses clues your way, and a number of these clues had been tossed at me this year. Several solo entrepreneurs had approached me asking for support with their businesses. This had never happened before. In addition, I had created my own process for making big decisions, and found myself offering that to friends, family, and clients who asked for decision-making support.

Once the “island” of Sustainably Sensitive had appeared above the water this summer, I realized these requests and interactions had been the signs of new “somethings” wanting to happen. I sensed what each project was needing, and lo and behold, I’m now putting the finishing touches on a Sustainably Sensitive Business program and a Big Decisions program, both of which will be featured on the new website.

The power of a name

We’ve seen how crucial and powerful it is to lend our attention to things we can sense that are as-yet-unnamed and unformed. Having decided to change my business name, I discovered overnight that it is equally powerful to name something that is ready to be named.

I’ve loved my current name, Luminos Listening: the business started in 2007 as Luminos, and I added “Listening” to the title later and kept it when I put up a new website in 2014. Luminos was a made-up word that came to me during a meditation. I liked that it implied light, and that it felt open enough to accommodate the variety of modalities I was offering.

But 11 years later, I’ve grown weary of spelling “Luminos” for people, saying, “It’s like luminous, without the final U.” And the name doesn’t make it clear what I do. Sustainably Sensitive, by contrast, captures the essence of my purpose: to help sensitive people create emotionally and professionally sustainable lives by listening more deeply to themselves and to their spiritual intuition.

I’ll share more about the look and design of the new site, and why I chose the dahlia as a graphic symbol for Sustainably Sensitive…

And I’ll remind you to keep an eye out for the first issue of
the new Sustainably Sensitive e-zine—
which will arrive in your inbox on Tuesday December 18.

This transition will happen automatically. You will continue to receive two articles a month, on the first and third Tuesday of each month. The only thing that will change is the name and design of the newsletter.

Questions about the change?  Email me at emagnew123 (at) gmail (dot) com (replace words in brackets with appropriate symbols)

« I left work behind for 16 days in India. Was I irresponsible…or inspired?
The “blood oath” that caused my “HSP nervous breakdown”…and a look at my new logo »