The perks of being highly sensitive: extraordinary vividness 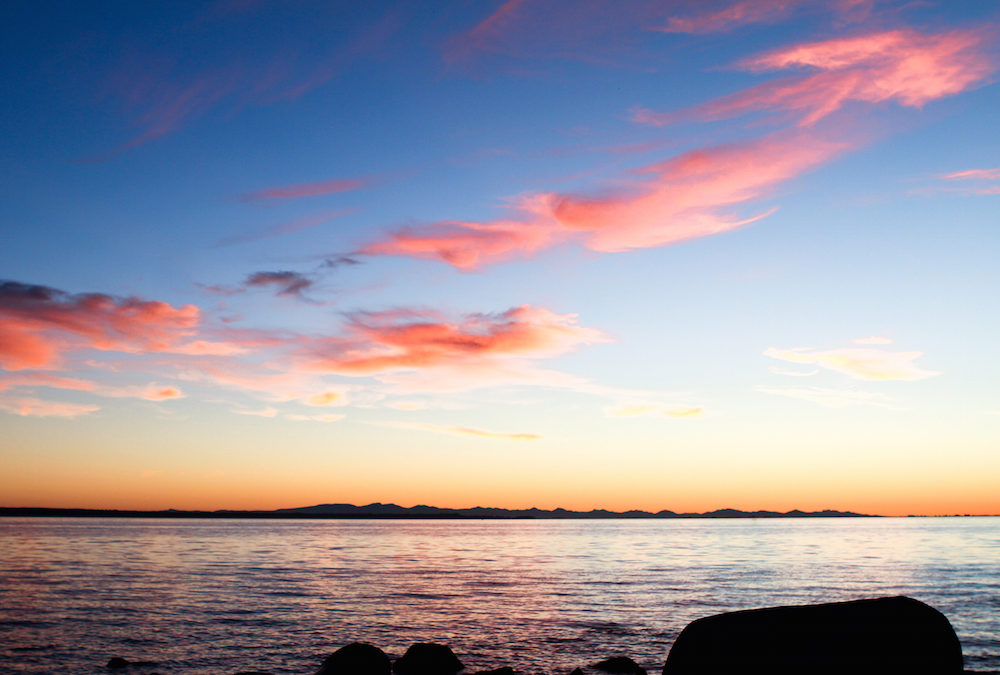 I find this sunset extraordinarily vivid.

“Vivid” is my attempt to describe the complex reaction I feel inside as I look at the shades of blue, the shapes of the clouds, the play of color on the water.

But then, I find all kinds of sights, sounds, tastes, smells, and feelings extraordinarily vivid: bumblebees and the clumsy, companionable way they lurch around the garden. Homemade pesto. The 15th century sacred choral works of Clemens non Papa.

“You’re always so excited about something!” my sister exclaims, with a hint of exasperation. I’ve pondered that, and I decided it is true—in part. I might be excited or I might be upset. But whatever the feeling, I do tend to feel it deeply.

That’s because because I experience things vividly.

Vividness goes with the territory

The source of this vividness is my high sensitivity, also called sensory processing sensitivity (SPS). SPS is marked by “awareness of subtleties in stimuli as well as a potential to be overwhelmed by too much stimuli.”*

Translated, that means you notice details that 80% of people don’t notice. Implied but not stated is a second key aspect of SPS, which is deep processing: you take all those things you notice—internal stimuli like feelings,and external stimuli,from sunsets to symphonies, sirens to sarcasm—deep inside yourself. So deep, you can get overwhelmed.

Overwhelm can be a good thing

I was in a sort of ecstasy, from the idea of being in Florence, close to the great men whose tombs I had seen…absorbed in the contemplation of sublime beauty…I reached the point where one encounters celestial sensations…everything spoke so vividly to my soul…I had palpitations of the heart, what in Berlin they call ‘nerves.’ Life was drained from me. I walked with fear of falling.**

In a post-mortem tribute to Stendhal for expressing this so vividly, scientists have named a syndrome named after him: dizziness, palpitations and even fainting are symptoms of Stendhal’s syndrome, which affects dozens of visitors to Florence each year who are overcome after seeing masterpieces like Michelangelo’s David.

I have a hunch Stendhal and his syndrome sufferers are highly sensitive. I didn’t manage to faint upon seeing the David in Florence, but I wouldn’t begrudge it I had: it’s hard to put in words how extraordinary that sculpture is.

Validating the power of vividness

My partner cries in movies, and I love that about him. My dad invariably gets choked up during a particular spot in Beethoven’s 7th Symphony. I observed that as a kid, and as a result I didn’t ignore or dismiss my own intense response the first time I heard an oboe. It was so beautiful to me, I ended up becoming a professional oboist.

Experiencing things vividly is a gift. It can be a very, very painful, too. But it is a first and foremost of gift. Other people aren’t likely to congratulate you on it: “Oh, you really reacted beautifully to that sunset this evening!” They can’t see the depth of your reaction, and they might not be able to relate to it even if they could. Unless you happen to be hanging out with another HSP.

So it’s important to own this and appreciate it for yourself. Notice and savor your vivid experiences as you go through your day. This will make you a happy. Make that deeply happy.

How does the capacity for vividness show up in your life?  I’d love to hear your experiences below.

Thank you Kaitlyn (kaity.wyenberg@gmail.com) for another vivid photo.

« Are you highly sensitive? 4 commitments you need to thrive
Thank you for the gifts of growth, meaning, and contribution—key needs for us as HSPs »

About the HSP trait