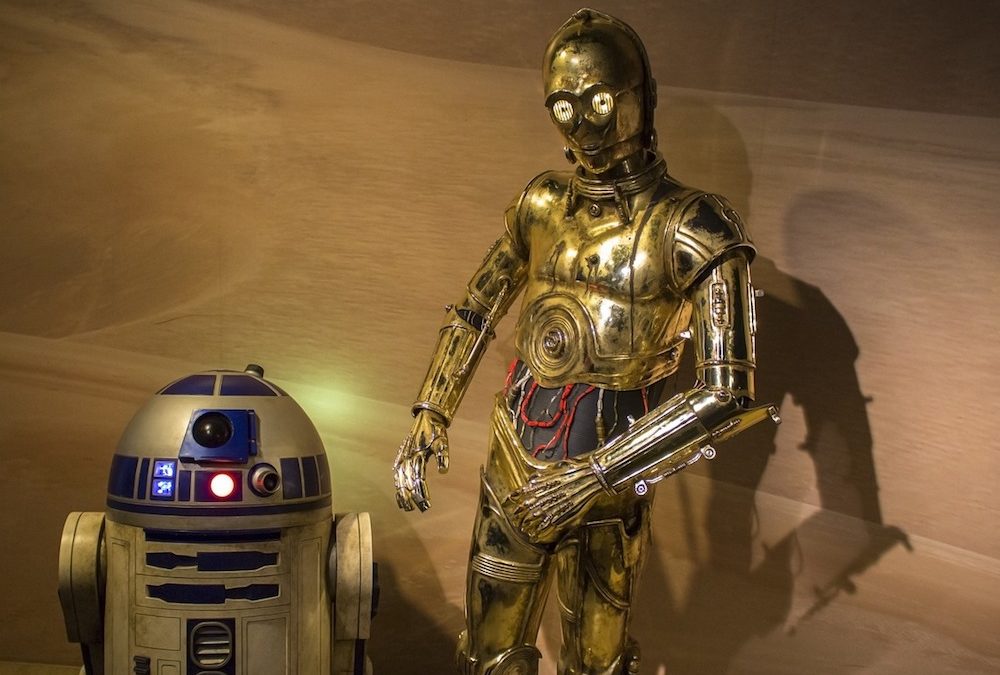 When that cruel inner voice attacks me, I can feel very alone. After all, who is going to come to my aid? Luke Skywalker? Yoda? The power of the Force?

I don’t think so. And I have a feeling Harrison Ford is busy. But there is someone who can help, and that’s my favorite bickering droid, C-3PO.

Did you know that C-3PO and his fellow droid, R2-D2, are the only two characters who have appeared in every single Star Wars film? As my partner and I watch the first six Star Wars movies in preparation for the new release on December 18, I’m reminded why: who can resist insults like, “Don’t call me a mindless philosopher, you overweight glob of grease!”?

But C-3PO’s verbal virtuosity is not the only reason he is so popular. We love him and R2-D2 because the two of them are so endearingly human.

In the midst of sweepingly dramatic Jungian archetypes of light and shadow, good and evil and all that cosmic conflict stuff, what are C-3PO and R2-D2 doing? Bickering. Shot at by storm troopers and bickering. Lost in the desert…and still bickering.

In fact, they sound an awfully lot like the voices in my own head, with one essential difference: my critical inner voices make me cringe, while C-3PO and R2-D2  make me laugh. Taming your inner critic can feel like a galactic quest against an overwhelmingly formidable enemy. But, as it turns out, the shift from cringing to smiling is more powerful than a light saber when it comes to confronting a critic.

Why? Because it’s hard to feel scared and ashamed when you are laughing. A sense of humor is a sure sign of Loving Adult Presence. And you don’t have to be splitting your seams: a rueful smile is enough.

He’s so endearingly anxious. He totters along in an ineffectual panic, waving his arms. He launches verbal zingers that have no effect at all on R2-D2 or anyone else. He’s a protocol droid, programmed to help everyone get along by doing what he thinks is the right thing…and it SO isn’t working. You really see clearly how helpless he is when he isn’t under supervision.

In their wonderful Treasure Maps work, Ann Weiser Cornell and Barbara McGavin have developed the idea of the inner critic as a Protector: a scared part of you that like C-3PO tries to protect you from real or imagined disaster.

In fact, C-3PO is the quintessential Protector in three ways:

How can this endearing droid turn into a Death Star?

That happens when you get identified with another part that believes what the Protector is saying. Then your inner Protector can feel like the Death Star—crushing, overwhelming, and cruel. From that merged place, you feel like you really ARE an overweight glob of grease.

When this happens to you, the key is to get back into Loving Adult Presence. Your inner C-3PO and R2-D2 sorely need supervision. And the key to that is compassionate humor.

When you look at C-3PO, you can’t miss seeing in his wide eyes how comically alarmed and helpless he feels. Even the way he walks…you can just tell he is in over his head. And that is exactly how your protector is feeling. If he or she (or it) looks like the Death Star to you in the moment, here’s what you need to do (and trust me, this really does work, but you have to actually do it, not just think about it. No cheating.):

Example #1 (C-3PO to R2-D2:) “Go that way! You’ll be malfunctioning within a day, you nearsighted scrap pile!”

Translation: “R2, I don’t like this idea of us separating! I’m sure you are going in the wrong direction, and if you malfunction, I won’t be able to help you!”

Example #2 (C-3PO to Chewbacca, who has just reassembled him backwards:) “You flea-bitten fur ball! Only an overgrown mop-head like you would be stupid enough to…[and so on]”

Translation: “I can’t put myself back together without your help, and I feel scared and helpless (and I hate feeling that way)!”

Example #3 (My Protector to me:) “For God’s sake, what are you DOING, wasting time cleaning out your spam folder??! Do you even WANT to pay the rent?!”

Translation: “I’m really worried you are putting off doing the stuff it is most important for us to do to build our business.”

Get the idea? Try having a conversation with your inner C-3PO and let me know how it goes. There’s more to this (including R2-D2’s side of the argument), but we’ll have to cover that later—time to go watch Return of the Jedi.