The Beatles needed a producer. We need Loving Adult Presence. 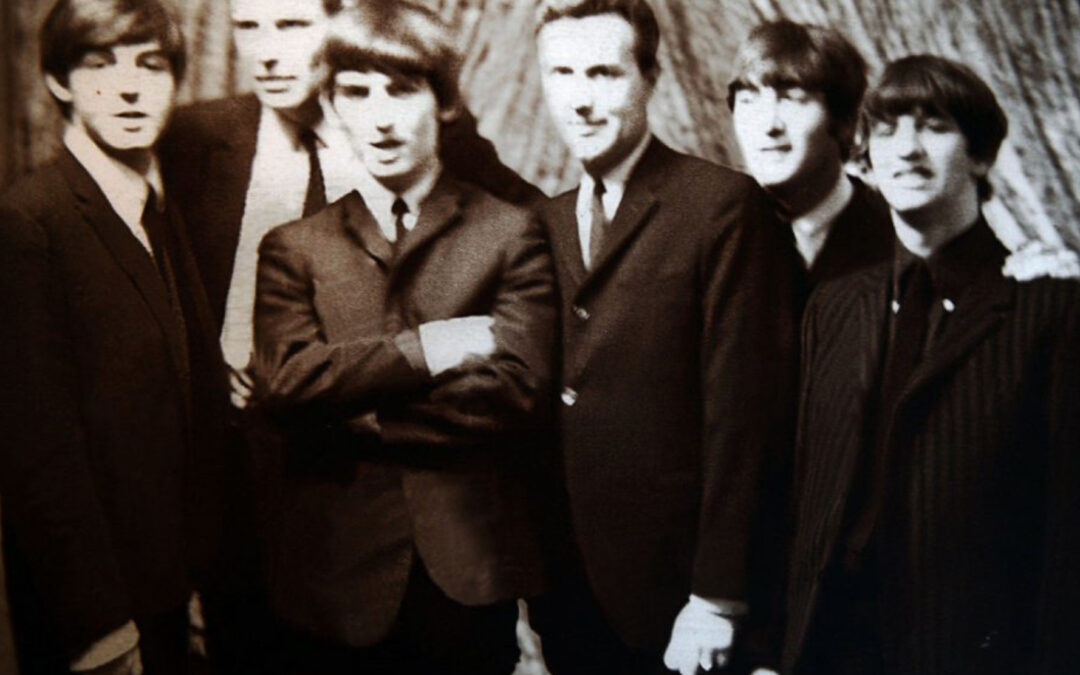 We need to cultivate Loving Adult Presence. Otherwise our parts will try to run the show, and that never goes well.

I grew up with The Beatles. My whole family would go into the living room after dinner and dance to Sergeant Pepper’s Lonely Hearts Club Band, and I taped the White Album souvenir photos of John, George, Paul, and Ringo to the wall of our basement playroom, along with the lyrics of Let It Be, hand-copied in a rainbow of magic markers.

It goes without saying, then, that as we started watching Peter Jackson’s new documentary about The Beatles, Get Back, I was mesmerized. I loved watching the creative process as John, George, Paul, and Ringo wrote and recorded the songs I’d heard so many times. To my surprise, though, the person I found myself most drawn to watch during his infrequent moments on screen was George Martin.

George Martin, The Beatles’ long-time producer, worked so closely with the band that he was sometimes called “the fifth Beatle.” I had vaguely heard of him but never thought much about him. Seeing him in Get Back changed that.

I was struck by the essential importance of Martin’s role. His relationship with the band struck me as a usefully vivid metaphor for the kind of internal relationship we each need to cultivate with our inner parts.

Our highly sensitive minds produce such a kaleidoscope of options, permutations, connotations, and interpretations that we can so easily thrash around day by day, get off track, and get confused. Loving Adult Presence is elegant in the mathematical sense of the word: it directly and economically reveals to us our path forward.

From Presence, we can access the whole felt sense of a situation. Then, with subtle precision, we can sense our right next step. In doing so, we needn’t ignore or silence or get rid of any of our inner kaleidoscope of voices. After all, The Beatles would not have been The Beatles without George, or Paul, or John, or Ringo.

Even so, The Beatles needed a producer to stay on track.  Likewise, we need Loving Adult Presence to help hold everything going on in us. Then we can find a way forward that includes all this richness in our inner world.

In Get Back, George Harrison wears a pinstriped pink suit with purple frilled shirt and flowered mukluk boots. Ringo shows up in a lime green suit one day, and bright red with blue polka dots the next. Amidst this glorious explosion of 1960s fashion insanity, George Martin shows up in a gray suit and tie, or a black turtleneck and pleated slacks.

George Martin most often stays in the background, watching and listening, or in the recording booth. Sometimes his contributions seem small, such as, “Paul, the bass is out of tune.” But he also offers transformational perspective, as when he explains to the frustrated band that the current microphone and speaker setup is contributing to their inability to hear themselves and each other.

Nor does he merely explain. He takes action to solve problems. In that same way, Loving Adult Presence is much more than just witnessing: it can include decisive action. From the perspective of Presence,  you see what needs to happen to stay in integrity with yourself. Whether the next step forward is something huge or something subtle doesn’t matter: what matters is that it is the next step.

Loving Adult Presence can “hold it all”

The whole magnificent, chaotic scene of The Beatles’ songwriting/recording sessions in Get Back struck me as a perfect metaphor for our inner world. We have all sorts of colorful inner aspects: some playful, some cranky, some inclined to ignore the passage of time, some wildly creative, some difficult.

In the absence of Loving Adult Presence, our inner parts do their best to carry the torch for our deepest needs and wants, taking over and trying to run the show.

Unfortunately, this never goes well. Parts alone cannot bring our wantings to fruition, because they are incapable of “holding it all.” As Paul McCartney puts it in Get Back,

The only trouble is, the only people I need to agree on what it is we’re doing is the four of us and we are the only ones who haven’t talked about it… it’s a united effort for us, or else I really feel like I’m trying to produce The Beatles and I know it’s hopeless. I just can’t do it, and no one can do it because the four individuals are too strong individuals.

That’s where George Martin comes in. On the surface, he tracks the time, offers astute ears to evaluate tracks, make key observations, and troubleshoots. But on a deeper level, he is holding the whole in a way that facilitates the creativity of each of the parts.  That’s exactly what we do for our inner parts when we are in Loving Adult Presence.

Loving Adult Presence is a work in progress

Loving Adult Presence isn’t like a hat. You can’t just put it on and be done with it, because Presence is relational: you must repeatedly choose to be present with your inner world as you encounter it, moment by moment. It may take a long time to learn to be present to some of our parts. George Martin, for example, was biased against George Harrison as a songwriter:

Martin didn’t like George coming forward with songs because he wanted “to concentrate on the guys who were giving me the hits,” Martin told CNN. He didn’t like George coming in and thinking he could be just as great. Initially, George’s songwriting “was kind of tolerated,” Martin said. “‘Oh, yes, we must have a George song on this thing,’” Martin would say condescendingly.

Yet it was Harrison who persuaded The Beatles to stop touring when they were all getting burned out, opening up a period of unprecedented creative blossoming for the band. He introduced his bandmates eastern spirituality. He exposed them to a much broader range of musical influences.

Last but not least, Harrison contributed some truly great songs. Over time, Martin’s attitude towards him finally evolved. He told CNN that “all of George’s influence on The Beatles was very benign and tremendous…his message was: Love each other.” A similar evolution can take place internally in us, but it takes a sustained, intentional effort.

You don’t have to have everything figured out

Living a rich, full life does not require everything in our lives to be orderly, predictable, healed, solved, or figured out. On the contrary. It’s about being present with what is, and sensing the right next step in the midst of the whole glorious mess—the “full catastrophe,” as Zorba the Greek called it.

In Get Back, great music is made in the midst of seeming chaos—a literal tangle of electrical cords, microphones, instruments, wives, kids, glasses of champagne, and trays of snacks. Having a producer like George Martin allows everyone else to be free…because they are held in a safe container.

To live our fullest lives, we need an inner George Martin to support and shepherd our creativity, along with our passion, goofiness, irritability, spaceyness, quirkiness, and stubbornness. Loving Adult Presence can make enough room for the whole crowd.

We may be wonderfully present with some aspects of ourselves, while attempting to exile other aspects: Loving Adult Presence will always be a work in progress. But what project could be more worth our time than cultivating the inner relationships that allow us to be more fully ourselves, and joyfully free? Thanks to John, Paul, George, Ringo, and George for their vivid example.

« HSP environmental susceptibility: what it is and how to use it to your advantage
Why deep listening is spiritual catnip for HSPs »