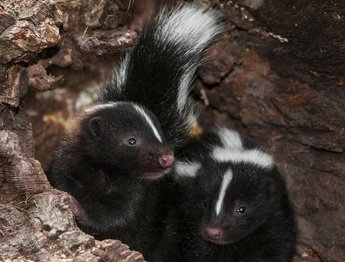 When we bought our house, we didn’t know it was a five-star groundhog resort, complete with deck refuge and salad bar—our garden. Overnight, my beloved partner became the long-suffering CEO of a groundhog relocation service.

Last week he stepped out back to find the Havahart trap occupied once again. But this time, it wasn’t a groundhog. Two baby skunks had succumbed to the lure of shredded kale and cabbage slices.

Moments later, their mother and two concerned siblings showed up—an alarmingly adorable swirl of bright eyes and plumed black and white tails. We had what the dictionary calls “a surfeit of skunks.”

The babies were impossibly cute. But I wouldn’t have dreamed of going near them. Skunks can spray from the moment of birth. Feeling the immediate force of that possibility, I found myself thinking about boundaries. Understanding boundaries and how to set them is really important for anyone, but it is downright crucial for sensitive people. Why? Because we are more susceptible to our environment our  than most people. That means other people’s actions affect us more. And it is our responsibility to deal with that.

No one messes with a skunk. Why?

Skunks are superstars in the boundary department. People and predators alike treat them with extreme respect. Experienced animal control officers approach them gingerly, wielding oversized golf umbrellas by way of a shield (or ours did, in any case.) Only a great horned owl will willingly attack a skunk (along with certain reckless dogs, whose wretched owners find out that filling a tub with tomato juice is an impractical strategy!)

Clearly, the skunk’s techniques are highly effective, though I’d stop short of packing a water gun filled with horrible-smelling perfume. But I wonder… what would a skunk say if we hired her to lead a seminar on boundary-setting?

“Don’t worry about controlling what other people do. Just be crystal clear what you will and won’t do.”

The skunk stamps her feet and fluffs her fur to let you know she feels threatened. If you don’t get the message, she’ll spray you. In that spirit, I might say, “I’ll be happy to fill out these forms for you if you get me the information by dinnertime tonight.”

My version of stamping my feet and fluffing my fur might consist of a simple reminder: “Hey, it’s 5 pm and I need that information by dinner time if you want me to fill out those forms.” The “spray” in this case is whatever consequences you have to deal with if you don’t get me the information on time and I choose not to fill out the forms.

“If you want respect, be 100% consistent about keeping the boundaries you set.”

If you fail to get me the information by dinnertime tonight and I fill out the form anyway, resenting you all the while, I’m not acting like a skunk.

In fact, psychologists have a term for this: it’s called intermittent reinforcement, and it’s the bane of boundary setters everywhere. If you set a clear boundary five times with Joe, but cave in the sixth time, you are sending the message to Joe that it’s worth pushing your boundaries, because you might give in.

We take skunks very seriously because they never indulge in intermittent reinforcement. Their boundaries are powerful because they are utterly consistent. In fact, their consistency leads to another striking piece of skunk wisdom:

“If you consistently keep the boundaries you set, you will rarely have to “spray” anyone.”

Skunks are found all over North America. Yet think about it: when was the last time you smelled a skunk? The reality is, they rarely spray (when you smell one, it’s most often because it has been hit by a car.) They don’t have to.

Kids and seat belts are a great example of this. We know how kids can push our boundaries. But have you ever seen a kid refuse to put on their seatbelt? I haven’t. I think it’s because parents are skunk-like in their clarity about the importance of seat belts. “No seat belt, no leave the driveway.”

That’s a great example of a calm, minimally wordy (or wordless), skunk-like boundary. A good boundary creates an energetic force field around you. The clearer you are, the stronger the force field is, and the more others can feel it without you even saying anything.

“There’s no need to resent others when you set and keep clear boundaries.”

Skunks are peaceable animals. Left alone, they quietly go about their business and let other animals do the same. Thinking of skunks, I realized that when I don’t set and keep good boundaries, I “spray” resentment, blame, or anger.

You can try to “spray” others by resenting them. The problem is, it’s ineffective. And it’s painful, because you get sprayed at the same time. Brene Brown expresses this eloquently in her book, The Gifts of Imperfection. She was stunned when her research revealed that—

Compassionate people are boundaried people…The better we are at accepting ourselves and others, the more compassionate we become…it’s difficult to accept people when they are walking all over us. This research has taught me that if we really want to practice compassion, we have to start by setting boundaries and holding people accountable for their behavior.

This has been a particular challenge for me as a sensitive person because I think so much about the effects of my actions on others. It’s so easy for me to assume others can and should a) think more about their actions, and b) reach the same conclusions I would reach. The more I let go of this and focus instead on setting boundaries, the more peaceful I am and the more I’m able to accept people around me, whatever they do.

“Being yourself and being honest is the best boundary of all.”

Skunks don’t hide. On the contrary, their distinctive black and white stripes make them easy to spot even from a distance, giving us ample opportunity to run the other direction.

I have a history of acting more like a chameleon than a skunk: I’ve adapted or edited my words and gone along with things I wasn’t happy with for fear of making a stink. But I see how I end up feeling resentful when I do that. And as I mentioned earlier, resentment creates its own kind of stink. It poisons the air of a relationship and feels awful.

Our skunks reminded me of the importance of openness and honesty, and of my key task as a sensitive person: accepting myself and my feelings and needs, and accepting my own responsibility for advocating for those needs around other people. Brene Brown is right: the more I allow myself to be myself, and set boundaries accordingly, the more respectful, compassionate and accepting I am towards others, and the more compassionate, respectful, and accepting they are likely to be towards me.

In my next video later this month, I’ll talk about the boundary lessons I learned from some noisy upstairs neighbors.

Brown, Brene (2010). The Gifts of Imperfection: Let Go of Who You Think You Are Supposed to Be and Embrace Who You Are. Center City, Minnesota: Hazelden
Photo credit: Fotolia