The HSP dilemma: all dressed up but feeling exposed 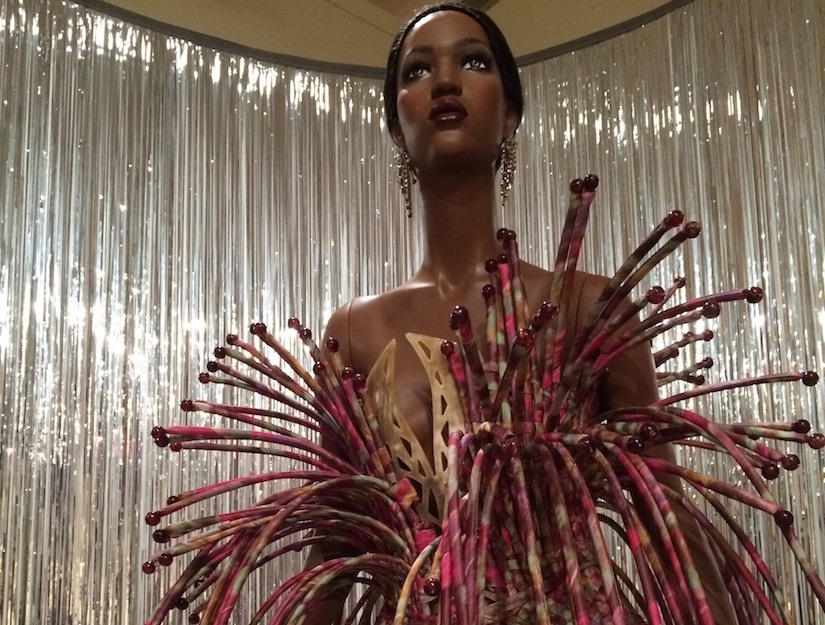 When I first laid eyes on this dress—one of forty haute couture ensembles from the 1960’s to the 2000’s, featured in the Ebony Fashion Fair exhibit—I laughed out loud at the sheer audacity of the design.

Some of the looks were lavish, like the floor-length coat made of multicolored strips of mink. Others were slyly humorous: a slinky navy blue floor-length gown with silvery beads of “water” cascading down the back from a beaded shower head. And some were simply outrageous, like this beaded explosion.

Some of the designers were already famous. Others were unknown at the time. But they all had one thing in common: they clearly weren’t afraid to express themselves in public. Or if they were, they had overcome their fear with flying colors.

I had expected to enjoy this show. I sewed many of my own clothes when I was younger, and I love textiles, embroidery, and unusual colors and designs. But I came out of the gallery so 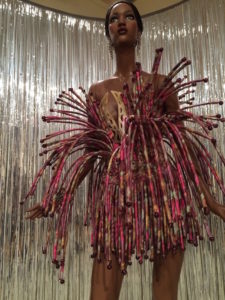 energized that I ended up spending an entire Focusing session exploring it.

I discovered that this unapologetically flamboyant, extravagant outpouring from others had reassured and inspired the creator in me.

The fact is, I’ve always felt ambivalent being creative in public. In my orchestra playing career, the internal conflict between the “wanting to express” and the “wanting to stay backstage” caused palpable tension in my body before concerts. With writing, the tension is subtler, but it is still there.

Why does hitting the “send” button feel so vulnerable?

I know I’m not the only sensitive person who feels this way. For one thing, we try so hard to think through every possible consequence of anything we do. Once you create something or say something in public, you can’t have it back. There is simply no way to predict what will happen. It’s a big unknown.

That includes the reality that every time I “put myself out there” I might bother someone, bore them, or even piss them off. I know I have no control over other people or their reactions. But like many sensitive people, I struggle not to take others’ critical or upset reactions personally.

On top of that, by the time I’ve pondered and clarified an idea enough to share it, I start to question its value. I re-read it and think, “Well, of course! That’s obvious!”  Then I get confused about whether to share it: will I insult other people’s intelligence? Will I get a Homer Simpson “DUH!” in my blog comments?!

That’s much worse. I’ve tried putting my creative side in the closet. But once the short-term relief wears off, I realize I’d rather risk criticism than feel dead like that. It feels terrible enough to get me back “out there” again.

So here’s to the outrageous visionaries who inspire people like me to venture back into their personal “audacity zone,” whatever that looks like. This changes my feelings about Lady Gaga. I’ll never make fun of her raw meat dress again.

« The HSP paradox: you crave time alone, but you need company to soar
Three ways to be a quiet leader in a fearful world »