How shaky boundaries turn your sweet self into a cranky ogre 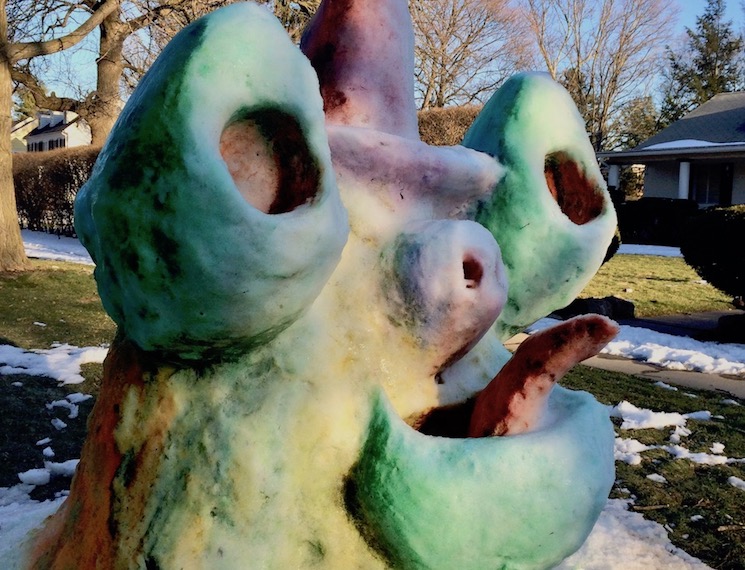 This spectacular snow monster (spotted near here last month) looks like I feel when I don’t set good boundaries. Long story short, I turn into a massive lump of frigid crankiness.

I’ve got lots of company. Boundaries are tricky territory for most people, and even more so for those of us who are built sensitive.

To even think of setting a boundary on your own behalf, you have to recognize your needs and value them. For many HSPs, that doesn’t come easily. For me it has been a life-long task: I didn’t even know I had needs until I was in my thirties. I’m still uncovering areas in which I struggle to acknowledge my needs as legitimate.

On top of that, you may hesitate to draw a line in the sand with others because you fear the conflict that might arise. Your vivid imagination goes wild and spins out catastrophic repercussions. This can stop you in your tracks. Hence the monster, simultaneously angry from unmet needs and frozen with fear.

Do you have snow monster-ish symptoms? They aren’t hard to spot, once you know what you are looking for. Here are the signs of shaky boundaries. Some are obvious. But others are subtle:

You feel chronically angry or resentful:

Example: You like to get to the movies in plenty of time to get in your seat before the previews start. But your partner is never ready to go when you want to leave. This has happened so many times that you get irritated even thinking about it.

You notice a critical or judging attitude towards someone:

Example: I’m working on a project with someone who doesn’t reliably respond to my emails, preventing me from taking necessary next steps. I notice my frustration is coloring my entire attitude towards this person.

You avoid certain persons or situations altogether, even though you feel torn about it:

Example: I attended a workshop once in which the presenter revealed private information about me in front of a large group of people. I valued the work itself, but I never went back. I could not think of a boundary that could prevent this from happening again.

Now take a moment to consider: is there a person or situation in your life who provokes snow monster symptoms in you? If so, you’ve identified a shaky boundary. Let’s pretend you are stressed at work because your boss Dave has a temper. When he gets angry, he stands a foot away from you, raises his voice to a high volume, and jabs his finger towards your nose. (If you are an HSP with a boss like Dave, you should probably be out looking for another job…but we’ll put that aside for the moment.)

What do you do? If you are like most HSPs, you first try to adjust your own behavior every which way to avoid making Dave mad. But eventually, you can’t take it any more. You steel yourself. The next time he steps towards you and yells and jabs, you say, “Dave, I don’t like it when you yell at me. Don’t ever yell at me again!”

Phew. If you’ve ever done this, you know that it feels better than passively enduring treatment that you find intolerable. But—did it work?

I didn’t think so.  It hasn’t worked for me either, and there’s a good reason why: you can’t control other people. Dave’s yelling is not under your control. If you want to take care of yourself, you cannot rely on solutions that require the other person to change their actions.

That doesn’t stop us from trying. We’ve all used anger, shame, blame, explaining, and education to try to control other people and their pesky ways. But in the end, the bald truth is worth stating again:

YOU CAN’T CONTROL OTHER PEOPLE!

This is the biggest boundary- setting mistake. If your boundary requires me (the other person) to do something, it is a house of cards. It will fall if I refuse to cooperate.

In fact, your weak boundary effort will make me less likely to cooperate because I don’t enjoy demands. Demands make my inner three-year-old pop out like a miniature snow monster. She sticks her tongue out and yells, “You are not the boss of me!”

So what can you do?

To set a clean boundary, avoid telling other people what to do. Instead, tell them what you will do, depending on what they do. That means your boundary is based on things YOU have control over.

You have to act more like Visa. If I pay my card balance late, Visa doesn’t get mad. They just get even—to the tune of $45 for a late fee. That’s a clean boundary.

The only thing you can control is your own words and actions. Take your imaginary boss, Dave. You have no control over Dave’s yelling, but you do have control over your words and and your body. The next time Dave yells, you can say, “Dave, I’d like to hear what you have to say, and I’ll be happy to hear it when you can talk to me in the volume I’m using right now. In the meantime I’m going back to my office.” [Or to the bathroom. Or onto the roof. Anywhere but where Dave is.]

Take my real-life partner and the movies.  (Yes, that was me…I used to drag my feet. But I’m mending my rotten ways.) To set a boundary, he might say, “Em, I’m going to leave at 7:05 pm for the 7:30 show of Guardians of the Galaxy. Would you like to join me?” Then he’d have to be willing to leave without me. Or he could decide he values my company enough that he’s willing to risk missing the first preview. Either way, he’s approaching the situation in such a way that he won’t end up angry.

There is an additional option here: I could arrange to be ready at 7:05 pm. That’s not under my partner’s control, so there’s no way he can create a  boundary to enforce that. However, he might be able to influence me to change my behavior— if we can hear each other’s needs.

This kind of needs-based conversation can only happen if you are feeling friendly, or at least mutually respectful. To pull that off, my partner needs to have a “Plan B” in place—a strategy to meet his needs even if I don’t cooperate.

If he has no “Plan B” in place, he is much more likely to end up angry, resentful, or critical. He’ll make demands, my three-year old will react, and we’ll be off to the races instead of the movies.

Boundary-setting is a commitment and an art

To sum up, you can’t set clean boundaries unless you—

In short, good boundary-setting requires a high level of personal integrity and self-responsibility. And there’s more: it also takes practice and creativity. Real-life examples are invaluable to give you the feel of a good boundary, and I’ll share some in the next Listening Post. Boundaries are a major issue for most HSPs. The better you get at setting them, the happier you’ll be.

« Do you experience symptoms of subtle trauma? Here are six paths to relief
Let your clean boundaries be the “bad cop” so you can be the “good cop” »