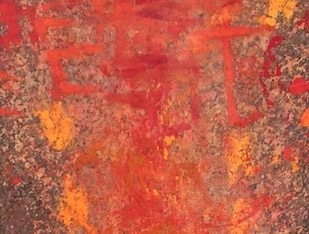 During our trip to India in October, we hired an auto rickshaw to take us up the hill to the Chamundeshwari Temple outside Mysore. The mid-day sun was beating down, and our driver advised us not to attempt the traditional pilgrimage climb of a thousand steps, but to walk down them instead. We passed pilgrims of all ages who carried small paper plates of turmeric and vermilion in which they’d dip a thumb, bending to mark each stone step. At the top, they had left their emptied plates next to the stone marker in this photo.

Climbing a thousand steps is a conscious, self-imposed act of devotion. The pilgrim vows to reach the top, despite pain, heat, or fatigue. In this case, both the vow itself and the strength to fulfill it flow from spiritual intuition, that inner sense of rightness you can access when you are fully present with yourself.

But there is a different kind of vow that comes not from a place of presence and spiritual intuition, but from fear and overwhelm. I call this kind of vow a “blood oath”. If you are built sensitive, it is crucial to be able discern the difference between a true vow and a blood oath—because a true vow is the most powerful positive inner force you can invoke, while a blood oath puts you in a strait jacket.

“Blood vow” vs “true vow”: what is the difference?

When you make a commitment from your adult consciousness and connected to your spiritual intuition, you take all your needs into account, not just the needs thaare loudest in the moment. For example, let’s imagine I’ve made a decision that turned out badly for me, because my dominant concern in the moment was to avoid upsetting someone else and I ignored my spiritual intuition. Later, looking at this decision from an adult perspective, I might say, “I vow that the next time I have a big decision to make, I will act on my inner knowing, even if others aren’t happy with me.”

When you make a blood oath, on the other hand, you say, “Over my dead body will I ever _________”. In this moment a younger part of you has taken over with the goal of avoiding pain. A blood oath has a life-or-death quality of intensity, like two kids pricking their fingers and signing in blood that they will never, ever tell.

Here we come to a tricky twist, though. Some blood oaths are taken consciously. But more often, the commitment is made outside your awareness. is unconscious. In this case, you sign the blood oath unconsciously, in invisible ink.

Whether your blood oath is visible or invisible, however, it will take over an area of your life and silently run it. Sometimes the only way to uncover this kind of fear-based commitment is to work backwards, looking for areas of your life where your choices feel limited or out your control.

Tracking a blood oath of my own

Blood oaths have been on my mind this week as I’ve contemplated the possibility that my new website, Sustainably Sensitive, will not be finished by the planned date of December 18.  It’s a bit disappointing, but no one is going to die if I delay the launch or (more likely) put the site up with a few pages incomplete.

What has really surprised me, though, is that I set a deadline at all, and that I’ve been able to work hard towards it with a relative minimum of stress. It was not always so. Deadlines are blood oath territory for me. I’ve worked hard to release myself from this particular contract, yet it still reverberates. Here’s the story of a particularly powerful blood oath.

The last time I put up a new website….

…was a fiasco—at first, anyway. In early 2014. Luminos Listening needed an update so I hired a web designer. Then, in a fit of bravado and in front of several dozen marketing program colleagues, I made a commitment to have the site up in two months. With the best of intentions, our marketing teacher suggested a self-imposed penalty to motivate me further. I ignored my discomfort with this strategy—and with the deadline itself—and agreed that if I failed to deliver on time, I would donate a chunk of cash to my least-favorite politician.

What neither of us realized was that I was under the influence of a blood oath, and blood oaths are immune to penalties or deadlines. When a part of you takes a blood oath, it does so because it feels its survival is at stake. Unfortunately, this life-or-death intensity drowns out the softer voice of your spiritual intuition, which in my case was reminding me that I’ve never responded well to threats, whether external or self-inflicted; that the deadline I was setting was wildly unrealistic; and that fining myself if I failed left me with no graceful way out. But I squelched these dissenting thoughts.

Needless to say, I missed the deadline by months. (On the bright side, I did let myself off the hook for the donation to my least-favorite politician, deciding I’d suffered enough already.) And  it took me several more months and many Focusing sessions to crack the code of this particular blood oath.

This is what I figured out: I had unconsciously signed this blood oath 13 years earlier. In the year before that, having left my marriage, I had moved out of our house, then moved a second time. I had put my oboe career on hold and got an administrative job, an entirely new field for me. I had taught myself how to use a computer. I had embarked on a doomed long-distance relationship. And had I tried to take the best care I could of my young daughter when she was with me, all while living on a shoestring and fielding angry calls and emails from my ex which left me shaking all over.

Although this was in all important ways a positive time, the sheer magnitude of change and stress was overwhelming. I was constantly overstimulated, and I soon became chronically exhausted as well. I experienced firsthand that being really, really tired is physically excruciating. And finally, after a year of this, I collapsed. You might call it “an HSP nervous breakdown”. I would call it “my body hitting me over the head with a baseball bat to get me to slow down.”

Nothing was visibly wrong with me, but my system was so overloaded, I could only do one thing a day: teach one oboe lesson, or see one client, or go to the store. If I tried to do more than one thing, my brain would seize up and I couldn’t think straight.

In response to all this stress, something in me signed an unconscious blood oath. It vowed it would never, ever let me take any action or make any commitment that could possibly cause me to get so brutally exhausted and overwhelmed again. And a sub-clause of this contract specifically forbade me to set deadlines.

So, no wonder this blood oath got reactivated in 2014 when I pressured myself to put up the new Luminos Listening site in a mere two months. Now, I am very careful now to keep a healthy, civilized schedule, and that frightened part has relaxed quite a bit. But even so, all these years later, I can still feel it watching me, wondering if I’m going to drive myself into the ground trying to make this deadline.

The word “never” is a clue a blood oath may be lurking. The more painful, scary, or traumatic the original incident or situation, the more intense the “never” energy of the accompanying blood oath will be. The blood oath that taken during my “HSP breakdown” was an intense one, set to reactivate at the least sign of overwhelm or fatigue, because the consequences of my actions during that time were serious, including leaving my job with no notice.

An “instant no” means you get pulled up hard and fast inside. It might happen when a friend suggests a possible solution to a dilemma you can’t seem to solve, and you feel like something inside you just slammed on the brakes….which, in fact , it did.  Blood oaths have a way of limiting your horizon of possibilities.

If you get an instant “No. Absolutely not. Out of the question,” consider pausing to take a closer a look. Eleanor Roosevelt famously exclaimed,  “You must do the thing you think you cannot do.” I’m not saying you must do that thing, whatever it is, but at least take a second look at it. You will very possibly find a blood oath underneath your “instant no”.

3—An area of your life that feels constricted, stuck, or boring

Feeling stuck or bored can be the visible manifestation of an invisible blood oath. A blood oath robs you of flexibility. It’s like having one piece of furniture in your living room bolted to the floor: you have to walk around it, and all you other furniture has to be arranged around it.

By contrast, if you make a commitment from your whole self, with your spiritual intuition guiding the process, your inner “living room” miraculously expands and the furniture rearranges itself into a new, more spacious configuration.

Do you recognize the signs of a blood oath in your life? Have you had success dismantling a blood oath and regaining freedom you had lost? Please share your experiences in the comments section below.

I chose a dahlia because dahlias are such a wonderful symbol for sensitive people: we bloom like crazy when they get the right kind of care.

I’m still shooting for December 18 for the first issue of the Sustainably Sensitive e-zine. Whenever the changeover happens, though, I’ll send one final Listening Post a few days before with a “heads up” reminder. Other than keeping an eye out for the change, you don’t have to do anything.

« My Underwater Volcano Theory of Growth
The power of “elegance” in HSP life and business —and: exciting site feature coming »