How to reverse the anxiety spiral 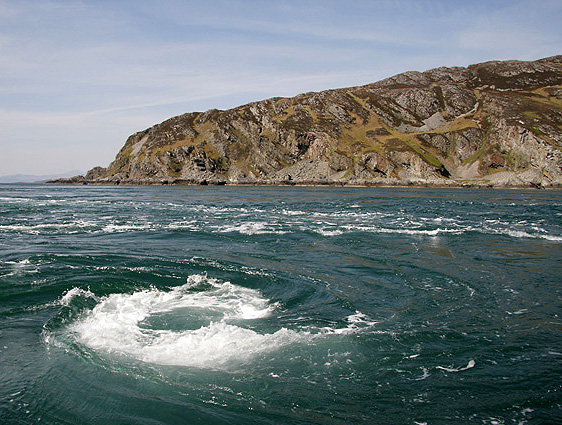 How can you reverse the anxiety spiral? Understanding the power of the maelstrom can help you find your way back to calmer waters.

I was not cut out to be a deep-sea diver. As a child I was unnerved by the mere sight of my bathwater going down the drain. The idea of water being sucked down to unknown darkness was deliciously chilling. So you can imagine my reaction to the scene in Jules Verne’s 20,000 Leagues Under the Sea in which the Nautilus submarine is sucked into the “Moskenstraumen” —the dreaded maelstrom off the coast of Norway. I’m lucky YouTube didn’t yet exist. Had I witnessed a video of that famous maelstrom—the most powerful whirlpool in the word—I might never have bathed again.

The force of maelstroms is awe-inspiring. The Corryvreckan off the coast of northern Scotland, the third-largest whirlpool in the world, is caused by flood tides forced into a narrow strait between islands. The sheer volume of water creates 30-foot-high waves. Their roar can be heard nearly ten miles away. Wikipedia tells us that—

…a documentary team from Scottish independent producers Northlight Productions once threw a mannequin into the Corryvreckan (“the Hag”) with a life jacket and depth gauge. The mannequin was swallowed and spat up far down current with a depth gauge reading of 262 metres (860 ft) with evidence of being dragged along the bottom for a great distance.

Reading this description, I quail. And no wonder. Wikepedia may be describing a whirlpool, but these words are also a viscerally accurate description of what it feels like to be sucked under by anxiety.

The punishing effects of anxiety

During the years I struggled with anxiety, there were periods when it ground along in the background. But I also experienced more acute episodes. I’d feel as if I were suspended over a whirling vortex that might pull me down at any moment. The fear of being pulled down was nearly as scary as the direct experience of it.

Paradoxically, my worst anxiety was caused by internally-generated thoughts, as opposed to concrete, present-moment dangers. If my anxiety had been subject to present action and resolution, like realizing I had left a burner lit on the stove then rushing home to turn it off, it would not have been so overwhelming. But even though my anxiety was caused by beliefs and reactions that had no basis in present reality, its effects were all too real.

As you know if you’ve experienced it, to be sucked down into the anxiety whirlpool and dragged along the bottom like the Scottish mannequin leaves you overwhelmed, bruised, and emotionally exhausted. Anxiety is hard on your health. It affects your sleep, your eating, your immune system, and your general resilience. I know this personally. I developed an auto-immune disorder after a period of extreme anxiety and exhaustion. I got sick frequently and struggled to manage basic life tasks.

How can we avoid feeling like victims of anxiety? Certainly, it’s much easier to prevent anxiety than to pull yourself out once you’ve spiraled down. Getting plenty of sleep and exercise and taking responsibility for the quality of your inner conversation are key elements of a sturdy personal infrastructure that can help prevent anxiety. A solid, practical, daily connection with your spiritual intuition is also essential.

How to reverse the anxiety spiral: three lessons from the maelstrom

Sometimes even with concerted efforts at prevention, you end up anxious. Here’s where the maelstrom can offer you more than just a terrifying symbol of the experience of spiraling anxiety. It can show you how to approach anxiety safely so you can heal it:

1—Remember that in this moment, you are fundamentally OK

Hanging on this truth is the most important part of approaching the anxiety maelstrom. It is also the hardest, because from inside the maelstrom, the anxiety is completely real. And co-existing with this reality, there is the reality that on the spiritual level, you can never be anything but OK. The way out is to hold both of these realities. You have a deeper knowing that the anxiety is not based on reality, and you are aware that something in you is terribly anxious. And you can be the space that holds both.

In his book, Man’s Search for Meaning, Viktor Frankl recalls talking to dozens of his fellow concentration camp inmates who were suicidal with despair. In that moment he somehow found a way to “be the space that holds both”—both the terrible conditions and the reality of something bigger worth living for.

2—Find a way to get some space around the feelings

Here you may need some kind of body-grounding practice. Breath work, EFT tapping, a body-grounding process from Focusing, or Focusing Presence Language may help. Body grounding may seem counterintuitive. Why would you want to be in your body when it feels so awful? But the truth is, as long as you are in the maelstrom, it is nearly impossible to be with it in the way that will help it shift. Body grounding is the essential first step towards being with the anxiety.

3—Go as slowly as your slowest part

You may be terrified of your anxious feelings, and no wonder. However, once you have gotten even a little bit of distance from the anxious feelings, you can turn towards them from this bigger place in yourself and acknowledge them. It’s like being in a helicopter looking down at the maelstrom. You see, hear, and feel it there, but you are not fully in it any more.

Now you can approach the maelstrom of feelings slowly, while attending to something in you that is afraid of the anxiety. Go only as close as this frightened part wants to, then stop. As it begins to trust you will not force it, the frightened part will allow you to approach the maelstrom of anxiety and keep it company, letting it be as it is. Then you can find out why it is so anxious.

Finding your way back to calmer waters

Staying present with strong anxiety can be very challenging to do alone. Do not hesitate to get 1:1 support if you need to. It is much easier to face the terrifying illusion of the maelstrom when you are with someone who is not affected by it. It’s like approaching the whirlpool from a distance, accompanied by a much stronger swimmer. The moment you start to feel yourself being pulled in, you can hold onto your companion and they can pull you out of the spinning water. Over time, you develop the strength to swim away yourself, and the discernment to know when you need to swim away.

As you develop a relationship with the maelstrom of anxiety, you begin to perceive that it is not the howling life-destroying nightmare you had thought. Rather, it is a terrified part of you that has been alone because you did not know how to be with it. When you get to know it, it will take you deeper, but in a good way, not a terrifying way. Then the waters will calm.

« “I have strong fear reactions to things that aren’t in themselves traumatic”
Do you find conflict overwhelming? »